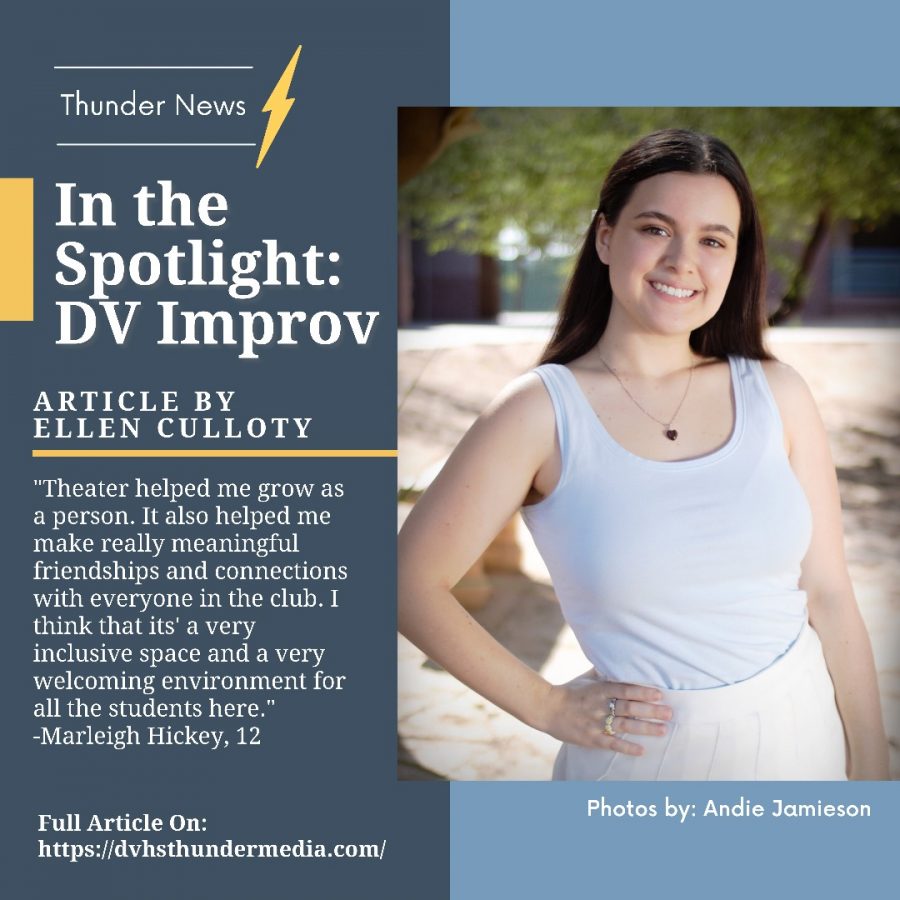 Like many schools across the country, Desert Vista is home to some exceptional acting talent. I sat down with Marleigh Hickey, Kyleigh Perales, Michael Mcloud and Shandi Johnson the Desert Vista Thunder Theatre Company President, Vice President and Improv Club Co Captains respectively (also all pictured above in that order) to talk all about it.

Hickey, a senior, has been into the performing arts for a number of years. “I did theater at my middle school and then I did some improv in a camp. I had people who went to Desert Vista beforehand, who went to my middle school, and they were like, “You should join this club”, and I was like, “sure!” and then freshman Friday they offered me free cookies.”

Hickey is a four year veteran of the club and will be playing Rosie in their upcoming production of Mamma Mia.

The company’s vice president Kyleigh Perales, also a senior, says “my sister was in it previously and then she told me. I have done theatre before, my middle school didn’t have a theater club so it was mostly like community theatre”.

She is starring as Sophie in the company’s upcoming musical.

Next, I asked Michael Mcloud and Shandi Johnson who are also seniors and this year’s improv co-captains about their improv experiences. “I did not do one lick of improv, I learned doing improv second semester freshman year, and that’s how I got into it”, Mcloud laughs, “I had a TA freshman year and she was the improv captain for that year. So she would always do improv games with us.”

Also a part of the upcoming musical, Mcloud will be playing Harry Bright.

Shandi goes on to tell her side of the story, “I did theater and improv in middle school,” his co-captain Shandi Johnson states. “I heard about TTC from my theatre 1-2 class my freshman year and I also learned improv from that class”.

How has TTC and improv impacted you and why do you encourage new people to join the clubs?

Shandi: “I would say overall it’s just kind of helped me grow as a person and accept who I am and build my confidence in a way. I would say you learn a lot. If you come to theatre you’ll learn more than just theatre you’ll also learn life skills and also more about yourself throughout”.

Michael: “I would say, ease with making relationships. It heightened my ability to, and to make meaningful relationships with people. It is super fun and you never know what it’s going to be, like every single day is different in our theatre company and improv club”

Kyleigh: “I feel like it mostly helped me grow in the best ways. It helped me become more comfortable reaching out. There’s so many different aspects to theatre. It’s not just the acting, it’s also tech, it’s sewing, it’s building sets. You find such a bigger love for something, like I didn’t realize I loved theatre this much until I got to this school”.

Marleigh: “Along the same lines as everyone else, it helped me grow as a person. It also helped me make really meaningful friendships and connections with everyone in the club. I think that it is a very inclusive space and a very welcoming environment for all the students here. It’s a very diverse club. It’s just a good place to get to know people and do fun things that you might not get to do outside of high school. Literally we had a tap dancing musical before it got cancelled and who can say they’ve tap danced before?”