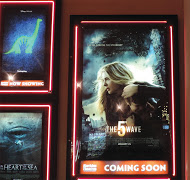 So many end of the world movies have been made, and we are getting one more with “The Fifth Wave”. It’s based on the best selling novel written by Rick Yancey and the movie is directed by J Blakeson. The movies stars Chloë Grace Moretz, Nick Robinson, Ron Livingston and many others.

The film will be released on January 22nd by Columbia Pictures and it is 1 hour and 52 minutes long. The movie itself will be about Cassie Sullivan, and how she has to run for her life as the aliens have initiated the 5th Wave. The first 4 waves left the world in havoc and now Cassie has to mend for herself and work to find her younger brother Sam. When she meets a young man that goes by the name of Evan Walker, he offers to help her in the task of finding her brother. Can she trust him? Or better yet, will she allow herself to trust him?

This science fiction thriller is sure to keep you bouncing in your seat. If you have read the book, then it is a definite must to go see “The Fifth Wave”. It probably won’t be as good as the book, sure, but it will still be action packed and very emotional. Be prepared and be ready.